Megalochori – after named Plomari- was the biggest rural centre of the region, and was constituted by 18 small rural villages, called Plumaria.

In 1841-1843 big fires burned down old Plomari, (Megalochori), while few years later, in 1850, the big frost destroyed the olives of Lesvos and led to desperation the residents of Plomari. In this difficult economic situation, the sharpness and the motives of Veniamin Lesvios (his origin was from Megalochori), prompted the residents of Megalochori to move to the coastal region of Plomari. According him, this repatriation nearby the sea would encourage the development of trade.

The new residents of Plomari

The fishermen and the seamen that lived there moved to the area Ammoudeli, next to the estuaries of river Seduntas.

So, the initial core of Plomari resided by the area Ammoudeli, near the area of Saint Nikolaos, which was named later Archontomachalas, gathering the most urban residences of Plomari. Northern were assembled more artisans, artists and independent professionals and at the Eastern side, in the area called Tarsanas, resided the naval population. 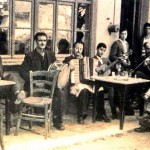 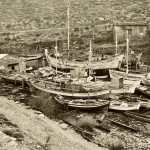 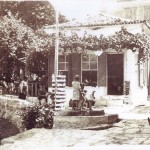 Plomari had a great economic growth from the end of 19th century up to the second world war.

During this time a lot of industries built. Soap-factories, two olive-core factories, flour mills and ouzo distilleries, mainly across the coastline, because the adjacency with the sea helped a lot the production and transportation of the products.

The various art-based laboratories of Plomari, also covered the needs of local population, and the rest region of Lesvos island.

The base of economy nevertheless remained always the olive crop and the industries that coexistent with the harvest of olives.

Olive crop was the only crop in Plomari and the landowners constituted the superior economic layer of city that extended in industrial and trade activities.

The particularity of Plomari stems from the impressive architecture of houses,   morals and customs, and the local linguistic difference.

The residents of Megalochori and of the other villages of region were the core of the new village, nevertheless the 19th century seamen from Cyclades, Kythira and Psara islands were installed in Plomari, as well as from Peloponnese and mainland of Greece, which were profited by the prospects of economic growth and the limited Ottoman presence in the region.

Although the adjacency with the sea, Plomari at first remained small and just in 1928, after decades of economical and commercial development, had the harbour and the jetty that characterizes it up today.

The manufacture of harbour gave new impulse in trade and the transportation, up to1950 when the new road network of island was developed and progressively the roads replaced the sea network that connected Plomari with the Asia Minor, Istamboul, Black See and also with the islander and southern Greece.